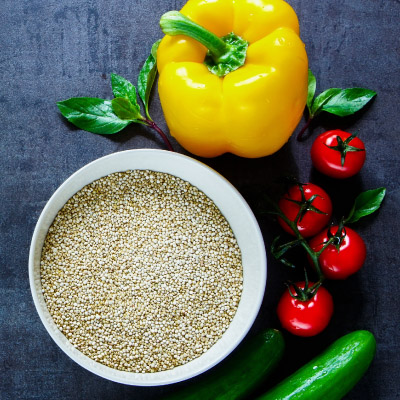 An Introduction to Going Gluten-Free

Many foods in our supermarkets are now marked “wheat-free” or “gluten-free.” Some of these foods are not new – corn meal and corn tortillas, rice cakes and rice noodles – but some of them may not be as familiar. Quinoa and sorghum flours? Amaranth grains? Why do wheat- or gluten-free foods matter?

The easy answer is that everyone can benefit from occasionally using wheat- or gluten-free ingredients. Nutritionally speaking, most of us are better off eating a variety of grains rather than the same one over and over again. Different foods contain different nutrients, and different nutrients support our bodies in different ways. In short, we’re healthier when we’re getting the full package rather than lots of one nutrient and very little of another. Wheat- and gluten-free cuisine encourages us to try new grains rather than eat wheat, wheat and more wheat. If we make a conscious effort to include ingredients like brown rice pasta in our dinners and almond flours in our cookies, we’ll tap into a broader spectrum of vitamins, minerals and antioxidants. But we have to make an effort to find and use these ingredients because most of our pastas, breads and flours are made from wheat products. Even sauces and soups often contain wheat.

From a flavor standpoint, wheat- and gluten-free foods are also intriguing because they give you a chance to add something new to your plate. How about a side salad of cooked quinoa tossed with fresh veggies? Add millet to your soups to make them heartier, or dredge your chicken breasts in cornmeal instead of breadcrumbs before frying. The cornmeal coating will be crunchy and light.

Now, let’s talk about what and where gluten is. Gluten is a protein found in wheat, barley, rye, kamut, spelt and triticale. (Oats contain far less gluten and may be considered gluten-free if they were grown and processed in gluten-free settings.) Any foods made with these ingredients contain gluten, including soy sauce, imitation crab, most beers and a host of other products. Typically, the more processed the product, the more likely it is to contain gluten – many fillers and flavorings are made from wheat.
The “gluten-free” designation is critical for the 1 in 133 Americans with celiac disease. Likewise, for anyone who’s intolerant or allergic to wheat, “wheat-free” foods are a necessity.

Celiac disease can be accompanied by obvious gastrointestinal distress or it can be asymptomatic. Either way, if a celiac eats a gluten-containing food, his or her body will mistake the gluten for an invader and unwittingly attack the celiac’s own intestinal lining. Over time, the celiac’s ability to absorb nutrients from any food will be impaired. The only course of treatment is to avoid eating gluten.

Those who are intolerant to wheat may be able to eat non-wheat, gluten-containing grains. Those who are allergic to wheat must take great pains to avoid it because while gluten and wheat intolerances lead to slow (albeit damaging) biological processes, food allergies can spark sudden reactions, like asthma or full-body swelling.

Thankfully, most grains don’t contain gluten. Many world cuisines feature alternative grains and seeds. In Central and South America, corn, quinoa and amaranth are prevalent; in Southeast Asia, rice is the staple food; in much of Africa, millet and sorghum are the predominant grains. European pastry chefs use finely ground almonds, hazelnuts and chestnuts to make incredibly moist and flavorful cakes. So the next time you’re curious about using a wheat- or gluten-free ingredient, give it a try. New flavors are a delicious way to achieve better health!